New York During the American Revolution 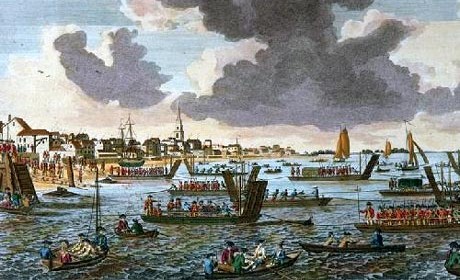 Anger over the Stamp Act fueled aggression toward England that took violent forms. The Sons of Liberty, which grew out of New York and the other original American colonies, would eventually partake in the Boston Tea Party. This was part of a long set of skirmishes that were occurring in the region that eventually led to a harsh response from England.

That harsh response included what Americans call “The Intolerable Acts,” which essentially neutered the Massachusetts government’s ability to self-rule. The American response was the Stamp Act Congress, which was the first recorded gathering of elected representatives in the region. The goal was simple: protest England and its outrageous demands.

The foundations of the American Revolutionary War were set in New York City during the year 1765.

New York was a hotly contested area during the Revolutionary War. General George Washington was present at the Battle of Long Island, which was the first major conflict after the Americans declared Independence on July 4, 1776. It was also one of the largest battles of the entire war, and one that General Washington lost. The Americans gave control of New York to the British shortly after, which they held for the entire war.

The city became a haven for British loyalists, which made it an excellent target for General Washington’s espionage efforts. The British targeted spies, suspected or otherwise, and held them in brigs offshore. It’s said that more Americans died on these ships thanks to neglect than were lost in every battle fought in the war.

The British were finally driven off in November of 1783, when General Washington returned to the site he’d once fled.

About the Author: Phin Upham is an investor at a family office/ hedgefund, where he focuses on special situation illiquid investing. Before this position, Phin Upham was working at Morgan Stanley in the Media and Telecom group. You may contact Phin on his Phin Upham website or LinkedIn page.

Tip of the Day

Getting enough sleep is important for effective studying and remembering. Be sure your child has an established bedtime at a reasonable time each night.